A traditional stick of rock is as popular today than it’s ever been. When you think of your childhood holidaying at the seaside, you’re sure to think of the sugary stick of confectionery that is ROCK! It’s a piece of nostalgia that with one taste, takes you straight back to the first time you ate one.

So, where did the idea of rock come from?

The earliest form of rock is said to have been sold at fair grounds, namely ‘Fair Rock’ in the 19th Century when sugar was abundant and inexpensive. Although it was not brightly coloured, striped or lettered in those days, it was of similar shape and size as it is today.

Depending on sources, it is believed to be linked to a young man named Ben Bullock, an ex-miner from Burnley, who conceived the idea whilst holidaying in Blackpool. He began producing sticks of brightly coloured, lettered candy sticks at his Yorkshire-based sweet factory in 1887. He sent his first batch of lettered rock to retailers in Blackpool, where it was well received and typically had ‘Blackpool Rock’ running through the centre. Other sources say a Victorian character by the name of ‘Dynamite Dick’ who came from either Morecambe or Blackpool is said to have ‘borrowed’ the idea from Fair Rock and added lettering to the design to make it is own. 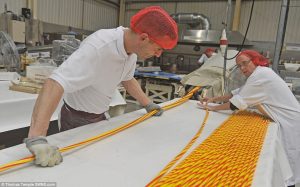 And how is it made?

You may not have thought it, but it takes an incredible amount of skill for sticks of lettered rock to be created, skill that machines are still unable to master even in the 21st century. Practised craftsmen of seaside rock are called Sugar Boilers and, as the name suggests, they start the process by boiling sugar and glucose in a copper pan heated to 300 degrees centigrade.

Once the sugar mixture reaches the correct temperature, it is poured out onto a cooling table, then pulled and separated into smaller sections. The inner core part is aerated and flavoured, traditionally mint or fruit, though now we have a variety of flavours from Eton mess to Chicken Tikka! While the flavourings are being added, the remaining outer layer and lettering sections are coloured. Getting the lettering correct is a skill that can take up to 10 years to master, as rock is often up to 6 feet long before it is cut.

The lettering, filling and core are rolled together before they are wrapped in the outer casing. The whole slab is then pulled, stretched and rolled into smaller, longer strips by machine and then, by hand, before being cut, wrapped and labelled ready for sale. 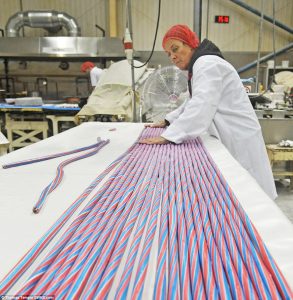 Click the link to watch our factory in action: https://www.youtube.com/watch?v=2LvoPhYeOdA

If you’d like to find out more about Candy UK and the branded and personalised confectionery lines we can produce for you, get in touch today.